We would like to highlight a few scenic sites within China's Ancient Capital, Xian. 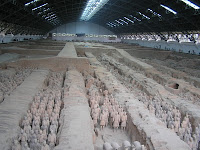 The Terracotta Warriors were buried within the vicinity of the mausoleum of China's first Emperor, Qin Shi Huang. The figures vary in height according to the importance of their roles. The tallest of the figures represent generals of his army. To this day thousands of warriors have been un-earthed and are on display as a popular tourist attraction. However, it is possible that there are still thousands of these warriors that are still buried in pits that have yet to be discovered. 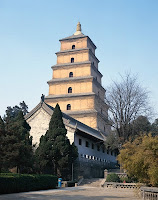 The Big Goose Pagoda was built during the Tang Dynasty and renovated during the Ming Dynasty this pagoda is one of the most well preserved Buddhist pagodas in all of China. The Pagoda holds many ancient Buddhist artifacts such as sutras and figurines of the Buddha that were brought to China from India.

The Ancient City Wall of Xian was first constructed as the first city wall of Chang’an around Xian.  The Ming Dynasty however is responsible for building what is known as Chinas most complete surviving city wall, its construction was started in 1370.